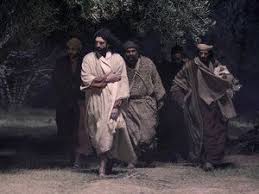 The Christian Gospels of Mark and Matthew say that, after the Ascension of Jesus, his Apostles “went out and preached everywhere”. This is described in Mark 16 verses 19 and 20, and Matthew 28 verses 19 and 20. According to a tradition mentioned by Eusebius, they dispersed to distinct parts of the world.

Eusebius of Caesarea, also known as Eusebius Pamphili, was a Greek historian of Christianity, exegete, and Christian polemicist. In about AD 314 he became the bishop of Caesarea Maritima in the Roman province of Syria Palaestina. I am inspired by an early day Rush Limbaugh by the name of Paul Harvey. He had a segment of his radio show entitled The Rest of  The Story…and that is what this blog hopes to complete; the rest of the story of the crucifixion of our Lord and Savior…Jesus Christ. I shall pick up in the garden… Matthew (Chapter 26:55-56)

55 At that hour Jesus said to the crowds, “Have you come out with swords and clubs to arrest me as though I were a bandit? Day after day I sat in the temple teaching, and you did not arrest me. 56 But all this has taken place, so that the scriptures of the prophets may be fulfilled.” Then all the disciples deserted him and fled.

We know Peter hung around a bit and was accused of being one of those men from Galilee who was with Jesus. We know Peter denied ever knowing Jesus…three times and we know who was at the cross… the rest were in hiding. What happens next? There is the resurrection, the empty tomb, the ascension and then moving on…the rest of the story. Judas hung himself due to overwhelming remorse for his betrayal of Christ. It is interesting to note that all of the accounts of this event never state any repentance on the part of Judas had in the eventual arrest and crucifixion of Jesus. There is some debate as to whether Judas fell from the tree or hung himself… my answer to that is don’t sweat the details. I was overwhelmed by the mass of information available in today’s world of digital services… For all of us we are only a keyboard away from the rest of the story.

Peter was one of the Twelve Apostles of Jesus Christ, and one of the first leaders of the early Church. He died between AD 64 and 68, was also known as Peter the Apostle, the Rock, Simon Peter and Simeon, Simon or Cephas. Peter was crucified in Rome under Emperor Nero. He is traditionally counted as the first bishop of Rome‍—‌or pope‍—‌and also as the first bishop of Antioch. Two of the general epistles, First and Second Peter, are attributed to him. It must be noted that as with many of the books in the New Testament there are those of more modern thought who reject that but there is a growing support for Peter having written both.

He was one of the twelve chosen disciples of Jesus, but he was also one of three men in Christ’s inner circle.  James’ zeal for Jesus resulted in his being the first of the twelve apostles to be martyred. He was killed with the sword on order of King Herod Agrippa I of Judea, about 44 A.D., in a general persecution of the early church.

One of the Twelve Apostles of Jesus and traditionally believed to be the author of the three Letters of John, the Fourth Gospel, and the Revelation to John in the New Testament. He played a leading role in the early church at Jerusalem. We know that John was exiled to the island of Pátmos where he wrote the Revelation. It is recorded that John died in Ephesus as stated by the bishop of Lyon who says John wrote his Gospel and letters at Ephesus and Revelation at Pátmos. John would have been in his eighties.

After the crucifixion and Pentecost, Andrew preached in Asia Minor and in Scythia, along the Black Sea as far as the Volga and Kyiv. Andrew was born at Bethsaida on the Sea of Galilee (John 1:44). Later, he lived at Capernaum. Andrew and his elder brother Peter were fishermen by trade and they were the first apostles to be appointed by Jesus. It is said that Saint Andrew, refusing to be crucified on the same type of cross as Christ because he was not worthy, was martyred on an X-shaped cross.

In Christian tradition he is known as the unfortunate saint who was skinned alive. Little is known of his activities as a disciple other than what is related in the Gospel of John. After the Resurrection, he is traditionally believed to have preached in India and Armenia. His death, said to have occurred at Albanopolis, is uncertain. According to some, he was beheaded; according to others, flayed alive and crucified, head downward, by order of the king for having converted his brother.

The title “James the Lesser” or “the Little,” helps to distinguish him from the Apostle James, son of Zebedee, who was part of Jesus’ inner circle of three and the first disciple to be martyred.  I add this information only as an interesting point to consider. Some believe James the Lesser was the disciple who first witnessed the risen Christ in 1 Corinthians 15:7: We must note here that this is argued by many scholars to not be correct. Beyond this, Scripture reveals nothing more about James the Lesser. Regardless, to be recognized as one of the 12 was quite an accomplishment. The fact that each of these men sacrificed everything to follow the Lord, can’t be overlooked. These were ordinary men who were called to do extraordinary things in their lives.

He traveled preaching the Gospel in Judea, Samaria, Idumaea, Syria, Mesopotamia, Lybia, Beirut and Edessa. Saint Jude suffered martyrdom about 65 AD in Beirut, in the Roman province of Syria, together with the apostle Simon the Zealot, with whom he is usually connected. The axe that he is often shown holding in pictures symbolizes the way in which he was killed.

Mathew was one of the twelve disciples of Jesus Christ. He is traditionally regarded as the author of the Gospel of Matthew. When Jesus called Matthew he was a tax collector….one of the most reviled professions in ancient Judaism. Matthew is interesting because little is known about this apostle. There are a few times he is mentioned but the fact that his book Matthew is the first in the New Testament, begs the question….why do we know so little about this man? Little else was ever recorded about him. We are not really sure how he died. There is no surety where or how he died.There are all kinds of accounts that say he was beheaded, stoned, burned, or stabbed—one even suggests he died of natural causes like John. So I will rely on the what the Bible says about Matthew. In the books of Mark and Luke he is known also as Levi. He was a tax collector, considered himself to be a sinful man. He was an eyewitness to the life and ministry of Jesus Christ. He was an Evangelist, a title reserved also for Mark, Luke and John. I go back to earlier in this part to the fact that we really don’t know how he died. I am adding this as written from: overviewbible.com…..

As with most of the apostles, it’s hard to say exactly how Matthew died. There are several conflicting accounts about his death. The earliest records say he carried out his ministry in “Ethiopia” (not what we consider Ethiopia, but a region south of the Caspian Sea), Persia, Macedonia, and/or Syria. Clement of Alexandria quotes Heracleon, one of the earliest commentators on the New Testament, as saying that Matthew died naturally.

Following the resurrection of Jesus, Philip was sent with his sister Mariamne and Bartholomew to preach in Greece, Phrygia, and Syria. His preaching earned him the title of Philip the Evangelist and led him to minister successfully in Samaria, in Palestine. How did Philip die? There are many theories about that but basically, we don’t know how Philip died. But there are plenty of possibilities. One record says he died of natural causes. Another says he was beheaded. Or stoned to death. Or crucified upside down. What we do know is that he died sometime in the first century, possibly around 80 AD.

He is not always the most visible of the 12 but mention his name in full…he is not the Simon who became Peter…The Simon here is called Simon the Zealot. He appears only four times in the New Testament. Three of those times is when the Bible lists who Jesus chose to be His disciples. Theories of Simon’s Death and that is just what they are, number a few. There is very little about Simon the Zealot after Acts 1:13, though there are several theories about whatever happened to him.Most scholars, a nice way of saying, we really don’t know, believe he teamed up with Judas (surname Thaddeus) to spread the Gospel throughout Persia and Egypt. Simon became the second bishop of Jerusalem and the Roman Emperor Trajan martyred him sometime during Trajan’s period of rule from 98–117 A.D. Another tradition claims he died peacefully in Edessa (modern-day southeast Turkey).

Thomas is famous for having doubted the Resurrection of Jesus,   demanding physical proof of the wounds of Christ’s Crucifixion. Today we are all familiar with the phrase “doubting Thomas.”  However the other side to that is the fact that Thomas became the first person to with unwavering faith and conviction, acknowledge the divinity of Jesus. It is recorded that he died 53 CE, Madras, India.

I hope you have enjoyed the rest of the story. The last two words in the title also provide my closing question. After the resurrection and ascension will you be moving on to serve Jesus as he commanded the disciples? Truth is it is not over till Jesus comes back!