The gospels of Luke and Matthew both record Jesus as born in Bethlehem in Judea, to a virgin mother. In the Gospel of Luke account, Joseph and Mary travel from Nazareth to Bethlehem for the census, and Jesus is born there and laid in a manger. A simple story that most of us have read or heard over the years. Bethlehem is about 5 miles south of Jerusalem, standing at an elevation of about 2,550 feet above the sea. By the time of Jesus’ birth, Bethlehem had declined in significance to a small village. Three gospel accounts (

Matthew 2:1–12, Luke 2:4–20, and John 7:42) report that Jesus was born in the humble town of Bethlehem, estimates put the population at less than a thousand. Research and reading has helped me glean some interesting perspectives about this important event in the biblical writings about the birth of Christ.

Mary and Joseph were compelled to take the longer way to Bethlehem after Joseph had considered that while there was a shorter route, he must consider Mary was in the late stages of her pregnancy, the hilly terrain in that area and the difficulty of finding lodgings, would pose to great a threat to their safety and Mary’s health. How many days it took Mary and Joseph to complete their epic journey from Nazareth to Bethlehem? My study offered many different opinions. General belief is about 4 to 7 days. They would have arrived exhausted and in need of immediate lodging. Did Mary arrive in Bethlehem the night she gave birth? We really don’t know, they could have been there for some time. Scripture simply says “while they were there in Bethlehem, the days were accomplished that she should be delivered” (Luke 2:6)

There is a lot of information about the birth but one piece I found fit a lot of the information concerning Bethlehem, the customs of the time, the layout of the city and answered a question I have always had about this event. I understand the reason they had to take this journey but it always bothered me that Joseph was willing to risk getting lodging, as he knew the city would be overflowing with people at tax time and Marry was so close to her “time”. Here is W M Christie’s thoughts on that. 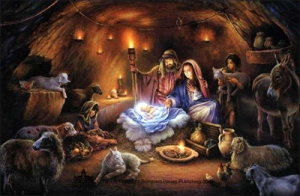 “Judging from the word used, and the conditions implied, we are led to believe that Joseph and Mary had at first expected reception in the upper room or manzil at the house of the sheikh of Bethlehem, probably a friend and member of the house of David; that in this they were disappointed, and had to content themselves with the next best, the elevated platform alongside the interior of the stable, and on which those having the care of the animals generally slept. It being now the season when they were in the fields (Luke 2:8), the stable would be empty and clean. There then the Lord Jesus was born and laid in the safest and most convenient place, the nearest empty manger alongside of this elevated platform. Humble though the circumstances were, the family were preserved from all the annoyance and evil associations of a public khan, and all the demands of delicacy and privacy were duly met.” M. Christie

At that time, sheep farmers were generally seen as having low or little value by other people. Shepherds were usually single men who had no land or stock passed on to them and it is possible that these were Temple sheep as they were not far from Jerusalem. The type of sheep the shepherds would have been raising were ‘fat tailed’ (or broad tailed) sheep. They often had lambs in the autumn and winter, rather than in the spring with most sheep in western countries these days. The shepherds were quietly getting on with their own business when suddenly an angel appeared to them and they were afraid! This is only the second time in the whole Bible that a group of angels rather than one angel had appeared to people, so this proved that they had a very important message to give to them.

After Jesus was born in Bethlehem in Judea, during the time of King Herod, Magi from the east came to Jerusalem and asked, ‘Where is the one who has been born king of the Jews? We saw his star in the east and have come to worship him.’ The story of the three wise men is well known but beyond those familiar words we find some interesting thoughts. Scripture does not say three wise men, it just refers to the wise men coming and bringing gifts. We are told that there were three gifts and perhaps this is where we have arrived at three wise men. In W. M. Christie’s writings, we find that the birth took place in a cave like place that was used to keep the animals secure when they were not in the fields. We do not know how soon the wise men arrived, was it days after the birth or longer? We might also consider verse from Matthew 2:11.

11 And when they were come into the house, they saw the young child with Mary his mother, and fell down, and worshipped him: and when they had opened their treasures, they presented unto him gifts; gold, and frankincense and myrrh.

Reading this we might also consider that by the time the wise men arrived some of the guests may have left and Joseph and Mary and the baby Jesus had been moved into the house.

I have left the star to last, even though research has shown me that it by far attracts the largest amount of speculation as to its origin. I have chosen to not become entangled in the many thoughts on this matter. I do believe that whatever is said or written, the Star was placed there by God to announce the birth of his son.

Going beyond the words, what do I mean exactly? There are certain scripture verses and stories that we revisit on a regular basis. The words become so familiar that they just become second nature to us. What I am trying to say and not doing a very good job of it, is that we become desensitized to them, diminishing the glory of God within the words or story. The story of the birth of Jesus brought hope to a dark world and to this day it brings the reconciliation between God and his people through acceptance of Jesus Christ and the forgiveness of our sins. Truth is the details are not that important but the gift given on that night is the way to our creator and eternal life.

And may God bless you in the coming year. No post next week….see you in 2017