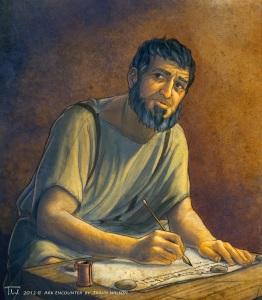 I have been reading a book by Calvin J Roetzel, “The Letters of Paul”and it occurred to me that many of us in the pew are familiar with the writings of the Apostle Paul, but what about the man? I always do what I call a thumb through with every book I set out to read and this was no exception. I purchased the digital version and now I wish I had got the book “book”. Those of us in the pew rarely have the time or access to such information. Having been retired for some years now has afforded me more time and oddly enough a desire to go just a bit father beyond the words. I thought I might share some of what I have been reading about the Apostle Paul with you here in the pew.

Thumbing through there was a phrase that caught my attention immediately. The author points to the “fiery rhetoric” of the Apostle Paul. I thought, wow….how true it is. If ever a better description of Paul’s writings is out there, I am stuck on this one. Every word out of Paul’s mouth or word to letter was a match to inflame the Jewish determination to deny, refute and abolish Paul and his message of the Messiah. Paul was a living contradiction to Jewish tradition. By his own words Paul was born a Jew and would die a Jew. Paul grew up in Tarsus an important city on the southeast coast of Asia Minor. Tarsus stood shoulder to shoulder with Alexandria, Corinth and Athens in importance. He would have learned to read and write and most likely pick up Greek literary and rhetorical terms in his early informative years. He would have been exposed to a very rich and multifaceted society that in years to come would influence his thinking while adding to his worldly experience. He would have had both Jewish and non-Jewish friends and playmates. He would have studied the Septuagint, the Hebrew Scriptures in Greek translation. So realistically speaking he would in years to come to some degree be influenced by that early time and that is something we should consider when reading his letters. There is also the consideration of this Hellenistic period in which Paul was exposed to in his early years.

“At this time, Greek cultural influence and power was at its peak in Europe, Africa and Asia, experiencing prosperity and progress in the arts, exploration, literature, theatre, architecture, music, mathematics, philosophy, and science. It is often considered a period of transition, sometimes even of decadence or degeneration, compared to the enlightenment of the Greek Classical era. The Hellenistic period saw the rise of New Comedy, Alexandrian poetry, the Septuagint and the philosophies of Stoicism and Epicureanism.” (Wikipedia)

We must not overlook the time that Paul claims to have spent with Gamaliel. I have included the following because it makes clear one of the interesting things about Paul the man.

“Gamaliel was himself a Pharisee in the tradition of the great Hillel. A generation before Christ there were two great rabbis, Hillel and Shammai.While this is a generalization, many of the rabbinic debates of the first century come down to the opinion of Hillel versus Shammai.  With respect to Hellenism, Hillel was more open to Hellenism than Shammai and was therefore more open to cooperation with the Romans. Evidence for this more accommodating opinion is found in the book of Acts.  Gamaliel is reported to have offered somewhat lenient advice concerning the early preaching of the apostles in Acts 5:34-39.  Basically, he said that if the movement is from God then it cannot be stopped, if it is not then it will not succeed.  Gamaliel is reflecting the Hillel tradition of non-violence and allowing God to deal with parties that against the Jews (Polhill, Paul and His Letters, 31).

This is certainly not the opinion of his young disciple Saul when we meet him in Acts 9 and according to Paul’s own self-description.  He was a ruthless persecutor who sought to stop what he saw as an aberration within Judaism.  The people who Paul persecuted were diaspora Jews who accepted Jesus as Messiah and claimed that he was raised from the dead.  How can we account for this violent reaction in a man trained by Gamaliel?” (readingacts.com)

There is much about Paul that would almost be opposites, contradictions to his actions given his birth and early years history. This quote from the book….

I had never taken the time to consider all that Paul as a young man within his Diaspora community was exposed to. Paul met the risen Christ on the road to Damascus and it changed his life and the lives of the Gentiles forever. What I am reading has impressed on me the massive change that Christ makes in those who accept and follow him. To me Paul’s greatness lies in what he left behind, trusting Christ to lead him forward from the blindness that was, to the glorious sight of what was to be the reward of those who followed Christ. We know of all the problems that Paul faced as he sought to take the word to the Gentiles. How then can we ever doubt the power of God through Christ and the Holy Spirit?

Good having you in the pew today, come back. Life is good……