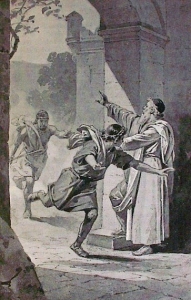 I always get a bit nervous when I step out of the Pew. What do you believe is the mission of the church? I believe that it is to share the word, tell everyone about Jesus Christ, minister to the lost, the hurting and the needy. To worship in a way that raises a joyful noise unto the Lord and welcomes all to the table. I am sure there are many of you who could say it better. The Church has always been the moral compass of our society. Christian beliefs can be found throughout our founding, Constitution, laws and daily dealings among our people. The church and christianity always had a place at the table. Sadly that is not the case here in 2018. Nuff about that at this time, there is another whole blog in that statement. Over the years the church has become involved in caring for the needs of God’s people in many different ways. From community to state, to nation, christians by way of the church have fed the hungry, provided clothing and other needs for the homeless even in some cases shelter from the elements. In all situations the church has reached out to God’s people when no one else would. It is inevitable because we are mortals subject to failure that there would be a fervency, a real emotional driven vigor that at some point we might overstep the need, or even redefine or expand the scope of the need; and that brings me to today’s question.

Borrowing from last weeks blog, we are also hearing a lot about another hot button issue of the day. Sanctuary or Refuge, is there a difference or is the end result the same? What is the meaning of, motive for and responsibility of, “Sanctuary Cities” in the world of today? For clarity Merriam Webster writes…

Sanctuary, a consecrated place: such as the ancient Hebrew temple at Jerusalem or it’s holy of holies. It could also mean the most sacred part of a religious building (such as the part of a Christian church in which the altar is placed) or the room in which general worship services are held a place such as a church or a temple  for worship. Or it could be  a place of refuge and protection, a refuge for wildlife where predators are controlled and hunting is illegal or the immunity from law attached to a sanctuary.

From here on that which was simple becomes a proliferation of meanings according to the situation in which the words are used. Would you be surprised to know that sanctuary cities  in the Bible were for different purposes than these today, in fact, they were not referred to as such. Sometimes mistaken meaning or clever use of terminology can become the tool of those whose goal is not to help but instead to aid in pushing an agenda or political ambitions and platforms. I have spent a great deal of time trying to honestly inform myself about the issue of illegal immigrants and during that time I have discovered that the word illegal is not PC when discussing this issue. Words are powerful and can unite or pull apart, in this case I have to say illegal is a proper and factual description of  the status of the people involved in this issue. The sanctuary cities, same-gender issues are hot button issues that distract from the mission of the church by appealing to emotions and hijacking the faith to use as a platform.

I believe it fair to say that the “cities of refuge” that we read of in Numbers 35 and Deuteronomy 19, do not in any way represent the characteristics of our present day sanctuary cities. According to Pastor Stephen Russ the claims made by the many churches involved is that they do function similar to the “cities of refuge”  found in the Old Testament. I agree in full with his assessment, they do not. I feel it is the classic hijacking of the scripture and  misunderstanding of the written word, in an attempt to add creditability to their agenda. Here from his article:

What are cities of refuge?

In both Numbers 35 and Deuteronomy 19, we find God instructing Moses to establish six cities as “cities of refuge.” If a man committed involuntary manslaughter, meaning he accidentally killed someone, he could immediately flee to one of these six cities. These cities were necessary because of a common practice where the offended family would appoint someone, often a brother of the deceased, to be the “avenger of blood.” (https://www.theologywithoutapology.org/single-post/2017/05/19/Sanctuary-Cities-vs-City-of-Refuge)

To better understand this issue I encourage you to read his entire post at the above link. Like all hot-button issues in the world today, they thrive on emotions, misinformation in the way they are presented and our, you and I, being uniformed. While I believe that enforcement of the law is important, we as Christians are commanded to love one another. The use of this situation, which by the way, is the fault of our government to deal with it and always kicking the can down the road while looking for an acceptable political solution, continues to divide us as a nation, and is troubling.

So we have learned that the word sanctuary can be used to describe different situations. The word refuge in OT writings, in no way resembles the sanctuary cities we are now dealing with. I can’t speak for you but as for myself, I have learned that Law, Politicians, and agendas alone will not answer this issue. So again I leave you to work it out. Will close with this thought….. Do not mistaken the scriptural meaning of sanctuary or refuge  as a way to disregard the laws of this land. We must separate secular inadequacies, turn to God and seek His wisdom.

Thanks for coming by.

Pastor Stephen holds a Bachelor of Ministry degree in Pastoral Theology, from Golden State Baptist College (2006-2012). He was ordained to preach on March 25, 2012, at the North Valley Baptist Church in Santa Clara, CA.You can find him on Twitter – @StephenRuss, or email him at sruss@boekeroadbaptist.org.