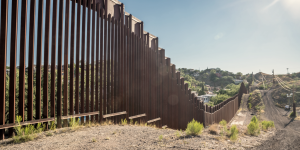 Once again a murder committed by an illegal alien has awakened the passions of both sides of this debate. I am of a small majority and there is the possibility, I may be the only one who believes that immigration is an issue of its own and the Church does not need to be involved in it. Say that again….The Church does not need to be involved in the immigration issue. It is fine for christians to bring their Christian Values to the debate and at this time in our nations history it is sorely needed. The church needs to direct its resources to the needs of those who are the victims of this ongoing immigration problem. As always another loss of life involving an illegal alien and down the same road we go. Here we see this identity trend pop up, more on that later.

As always in situations of this nature,  the narrative centers on the perpetrator and not the weapon, I make this distinction to make a point that the loss of life is overshadowed by the rush to gain political or social credit and to boost personal or organizational agendas. Because church today is influenced more than in past days by the pressure of social relevance, this is indeed a subject that resonates in the pew. Almost all denominations have issued position papers by leadership that explains their stance on immigration. Not everyone in every pew agrees totally with these particular statements, they differ from denomination to denomination. It is my opinion this has become a difficult issue because of an unintended turn of events surrounding immigration. We have been hearing about the evils of identity politics, which in turn has found its way into the immigration debate. This is taking us down a winding road that leads to no solution. Immigration has become a problem, why? People from all over the world have been coming to the United States from its very inception. I believe it is because we have assigned other factors to it, that complicate a very simple definition of immigrant as a person who comes to a country to take up permanent residence and does so as prescribed by law. Notice that no where in this definition is there an identifier that makes one immigrant different from another. There are just to many labels being ascribed to those people caught in this dilemma, consider this list:  immigrant, alien, illegal alien, illegal alien/immigrant or that shortened description uttered in total frustration, an illegal. Here is another one to add, it is a bit milder and strangely enough, the least used. Migrant…but “there’s no one simple description of a migrant. Across the U.S. political spectrum, politicians and activists present Central American migrants as either dreamers or law-breakers; those fleeing violence or those abusing immigration loopholes; crying toddlers or MS-13 gangsters. These labels force migrants into rigid categories, losing the diversity of their reasons and their wide-ranging demographics and backgrounds.”  I continue to quote from the article listed below. “The face of migration has also changed. Back in 2000, Mexican nationals made up 98 percent of the total migrants and Central Americans referring to Honduran, Guatemalan, and Salvadoran migrants only one percent. Today, Central Americans make up closer to 50%.”(lawfareblog.com  June 23 2018)

The road we are on has more turns than the “yellow brick road” and there will be no Oz and no Wizard to make things right at the end of our journey. Conservatives favor the term “illegal immigrants,” which hardliners often shorten to “illegals”; immigrant advocates prefer “undocumented immigrants,” a phrasing that they say prods the conversation back toward the humans in question, but “Unauthorized” often shows up as a neutral alternative. That is a brief history or background of where we are today. Now, what about the Church?

I have a rule when writing that it is important the information you share is as accurate as possible. I also believe that I don’t know everything. I have an opinion about everything but knowledge does not dwell in opinions. I have researched this immigration thing quite a bit. Churches have always been involved in humanitarian ministries, it is the Christian calling and we of the church are to lift up, protect the helpless, feed the hungry and oppose the injustices that marginalize those less fortunate than ourselves. There is a small detail that we often get wrong. We are to serve God’s people. Who are God’s people? We agree I am sure, that God created all things…. Here we find that detail, we sometimes pass over, all.  All people are God’s people, period. Back to my earlier statement “The Church does not need to be involved in the immigration issue.” The church does need to be cleaning up this mess created by Governments and organizations, also people with personal agendas as well as political parties who seek to strengthen their voting bases. The church needs to be on the people side of this issue, trust God to deal with the rest. The secular world is a good example of why the church needs to remain true to its calling. There are those, outside the church, who believe making placards, marching and chanting or screaming obscenities at those you disagree with or in general becoming a mob with an opinion does nothing to deal with or relieve the human suffering caused by this issue. In my research I have found two excellent articles that are well-balanced and I believe worth the read. Scott Rae is Professor of Ethics at Talbot School of Theology and author of numerous books on Christian ethics. The link to his article is posted below. The other author is Lynne Bollinger for which I do not have a direct link to. You will find her article “The Church as a Place of Belonging” included in a book by Dan Boone “A Charitable Discourse, Volume 2.” I have listed the publishing house below.

If you have read this far I encourage you to follow-up by reading the suggested material. We must as the church look beyond the issue of immigration as a social and political issue and do all we can to make it a “people” issue, “God’s People”. Pray, seek to be informed, become involved in your community through the many church programs that serve this immigrant community and remember

34 “Then the King will say to those on his right, ‘Come, you who are blessed by my Father; take your inheritance, the kingdom prepared for you since the creation of the world. 35 For I was hungry and you gave me something to eat, I was thirsty and you gave me something to drink, I was a stranger and you invited me in, 36 I needed clothes and you clothed me, I was sick and you looked after me, I was in prison and you came to visit me.’

We must do the Kingdom’s work.