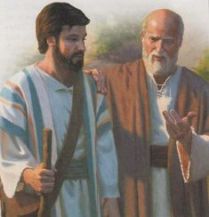 This week in the Pew I share with you from the second Book of Timothy, Chapter 3: 1-9 .The two letters to Timothy and the letter to Titus and a short letter to Philemon differ from the other Pauline Letters, in that they are private letters, written to individuals.

Although private in nature, their purpose is set down in 1st Timothy 3: 14-15. 14 I am writing these things to you now, even though I hope to be with you soon, 15 so that if I am delayed, you will know how people must conduct themselves in the household of God. This is the church of the living God, which is the pillar and foundation of the truth.

-care and organization of the flock of God

-instructions as to how God’s house should be administered

-threats which endanger the purity of Christian faith and life should be dealt with. (WB DBS)

I intend to  focus on the last one.I am not given to doomsday essays that are based on the current condition of society. I do believe that the spiritual health of the church in an indicator that we are moving closer to The Day of The Lord. The early church believed that the time was short, they expected Christ to come at any moment. I believe that within scripture we can find the knowledge to recognize those changes that will lead us to the time that God will challenge all evil and the finial victory of God’s coming will be established.

I must start by telling you that I am 76 years old. The importance of this is that I believe I am qualified to speak to the current state of the church and world today as I have traveled some years to get here. You might say that in these verses Paul takes no prisoners. He sees some disturbing events happening in the church and the world that go beyond normal change and growth as would be expected in this new way. Paul paints a picture of what a Godless world would be like in verses 2-5 and it closely mirrors our world today. People are living a life that is centered in self, destroying divine and human relationships. They value their stuff and money more than they do their relationship to God. They become arrogant and boastful for personal gain and prosperity. A person who is boastful is not hard to spot but arrogance is a matter of the heart and is often mistaken for confidence. Here is an interesting thought. Boasting and arrogance leads to a false pride and the result most often is insults to other people and the church. The old Rabbis called it the sin of insult. This becomes an action of contempt and results in hurtful words or harmful actions toward others. That which comes from such behavior is ugly, hard to understand and hard to forgive. People will be disobedient to their parents. I won’t stay long with this but it is a sure sign of a decadent civilization when youth loses all respect for age and fails to recognize the place of respect it owes to those who gave them life. People will become thankless. They will refuse to recognize the debt they owe both God and others. People will refuse to recognize even the basic decencies of life. People will allow their passions to rule their lives will seek to gratify them in the most shameless ways. They will be without human affection and so centered on themselves that even the closest ties of family and friends will be nothing to them. They will be relentless in their hatred of others, unable to come to an agreement or to forgive. They will not remember the words of the Lord, ‘Father, forgive them.’ It just keeps getting worse…people will slander another’s good name and engage in unfounded gossip with no regard for what it will do to someone else. They will be unable to control their desires, they will behave savagely with no human sympathy for man or beast. They will no longer value the good things of life such as the joy in keeping good company. They will fill their minds and hearts with sordid literature losing the good things of life and corrupting their minds. They will be treacherous in  their actions toward others, rushing headlong into things driven by their conceit and contempt for all things contrary to their direction in life. Lovers of pleasure rather than lovers of God. They will retain the outward form of Godliness but deny its power. They will turn from God and seek their own way. In the remaining verses 6-9 are disturbing patterns that are present in today’s church. There will be a time of seduction in the name of religion. There will be those who will gain an undue and unhealthy influence over others, especially with those who are easily impressed.  They will use the normal curiosity of people about new trends and changing moral and societal changes to ease moral resolve. People will turn from the day to day discipline of Christian life, lured into a desire to be a part of the newest fashionable movement or intellectual remake of the scripture, losing the battle to live a Christian life. These distractions will in time be defeated if we, God’s people remain strong in our resolve to pursue the more excellent way.

There is much going on in the Christian community this day. There will always be those who will wish to debate what has been written, turn a scripture to fit a situation they favor or oppose and mixed in among them will be the false teachers who attack or seek to change the word as written to fit their desires. Next week we will continue in 2nd Timothy starting at verse 3:10 and go through to the final chapter, of this very important letter.

Thanks for stopping by the Pew, mark your bibles and return next week.