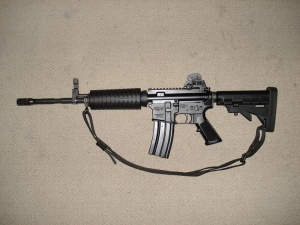 During bible study last Tuesday, one of our group asked if we knew the true story about the hymn “Stand-Up, Stand-up For Jesus.” He told us the story and It gave me some thoughts about recent events. Last week we were left speechless by the horrific event in Las Vegas. There are really few words that can adequately express the evil of this act or why it happened. We can only speculate why the shooter did this and the sad thing is the only real facts we have at this point really is that we are left with 58 dead, the possibility of more and 500 injured. The shooter is dead, having taken his own life. I will ask that you go to the following URL either now or after you have read the blog.

There will be many well-intentioned people and some also that have only the advancement of their agenda or special interest, that will come forward in the weeks to come with what they believe to be the solution to this type of violence. I will go out on the limb here, seems like I have been doing that a lot lately but this time I will take a saw with me. They all will be wrong! Guns, trucks, vans, knives, hatchets, explosives, just to name a few, are just objects that can do nothing without the irresponsible intervention of human action. 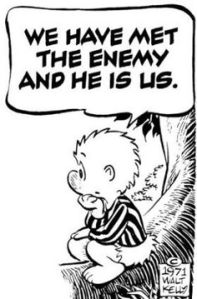 Oh, it’s a “hearts and mind thing.” No, It’s a God Thing! There will be laws passed and a lot of “pats on the back” for those involved, no matter how it turns out and many of us will feel a great deal of self-satisfaction having addressed this issue. The real issues will remain because we refuse to deal with the real enemy. Pogo a cartoon strip of not that log ago had a panel I have always remembered. Pogo in a moment of reflection simply says: “we have met the enemy and he is us.” Sure the guns, trucks, vans, knives, hatchets, and explosives are part of the problem of insane violence that is becoming a recurring event of life here in America. It is time we faced the fact, do a “Pogo” so to speak that none of the forgoing items listed can do anything without human intervention or assistance perhaps a better way of putting it; straight up in your face reasoning….we are part of the problem. We have created a society whose changing values have led us away from God and into a world that no longer values human life.

We have as a nation allowed ourselves to become desensitized to the violence, cruelty and the sufferings of others. The things we read, the movies we watch, the endless violence that is displayed each day within our homes and society, the opportunity to see and read such is just a button away in this digital world of today. Make no mistake about it, even the best of us are in some way influenced by such. I realize that we can’t detach ourselves from our daily routines in the world but the time to face reality is now. If we enter this debate about guns, focusing on worldly solutions, we will again have missed the “Pogo” and will continue to ignore our responsibilities as Christians. People of faith must step up, or better yet….Stand-Up For Jesus. We must re-establish the Christian values that have guided so many for so long as they built this nation we call home. Hey! We have failed in the past not just in today’s world. Two examples would be slavery and civil rights. Oddly enough both are still a problem to some degree in society today. Why?…..Because both were subject to a political and a social agenda. They were not a matter of the heart or an honest assessment of that popular phrase “what would Jesus do?” For us in the church the question is how do we do this? How do we as people of faith present a totally different approach to this violence prone society we live in? How do we present a different path that embraces all people and welcomes them not with a list of “do not” and replace that with a list of possibilities. How do we as Christians become more aggressive presenting and protecting our beliefs to a society whose values are constantly changing, driven by social demands and the changing of personal values to meet societal changes? Why do we as a church expect immediate change in a person, should we not allow our prayers and God and the Holy Spirit to do the work in an individual’s life? Let’s take a moment to ask a simple question that we may have overlooked. How can we expect others to understand something they can’t see? Remember this from John 20: 25

25 The other disciples told him, “We’ve seen the Lord!”
But he replied, “Unless I see the nail marks in his hands, put my finger in the wounds left by the nails, and put my hand into his side, I won’t believe.”

29 Jesus replied, “Do you believe because you see me? Happy are those who don’t see and yet believe.”

Please give this some consideration . Thomas was with Jesus, he had seen the miracles and had a relationship with the Jesus, so what happened?Thomas allowed the death of Christ on the cross to also become the death of his relationship with Christ. Thomas found it hard to accept the resurrection, he never doubted Jesus, it was that resurrection thing. This is taking the long way around to say….we need to tell the story. We must divest ourselves of becoming involved in every social issue that comes along and instead invest in telling the “story”, living a Holy Life, so that  “Thomas” out there can see and believe. We, the Church, must become part of this debate by the way we live our lives. We must be vocal in our beliefs, not condemning but lifting up, reaching out……so that they might see. We need to again sit at the table, re-establish our place in society. After all, how will they know the Lord, if someone doesn’t tell them.

There is always room in the pew, thanks for stopping by……..jk