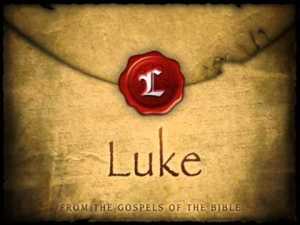 This week we start a journey through what has been called “The Loveliest Book”. I have always been thankful for the wealth of study aids available in our highly digital world but that fact has always added to the great amount of thanks I feel toward the early writers and theologians and men of the faith who over the years have provided us with these wonderful works of Biblical inspired writings. The very first thing I want to do is to acknowledge two of my primary sources of reference for this blog.

It is my intention to make this blog the first in a series about the Book of Luke. This is a book of lovely thoughts and the delightful fact that it was accepted as written by Luke without question. That’s important to me because most of the New Testament books face some questions about the authorship. We start with the amazing fact that Luke was a Gentile, he is as a matter of fact the only New Testament writer who was not a Jew. That he was a doctor by profession, (Colossians 4: 14)  helps to explain his extraordinary sympathy for all people. Much of his time was spent seeing people at their worst, seeing people just as they are and loving them all. The Book of Luke was written to a man named Theophilus who it appears has shown an interest in Jesus and his ministry. (Like 1:1-4)

The Biblical symbol for Luke is the calf…an animal of sacrifice. In Luke’s eye he saw Jesus as a sacrifice for the whole world. Jesus was a barrier breaker. No longer would there be Jew, Gentile, sinner or saint Jesus was the Savior for the whole world.  Luke was a careful writer, his Greek was good and overall his work is the result of careful research. A little more about Luke and his writing, he was a trusted traveling partner of Paul and was in a position of having met all the great figures of the Church. His background speaks to his being well informed and while Paul was imprisoned in Caesarea, Luke was with him for two years. It would not be that difficult to believe that Luke had many questions for Paul and also an opportunity for study and research. An example of the care he took in his desire to be accurate was the fact that he had no fewer than six dates with which to assign the date of the emergence of John The Baptist. He writes with great care choosing to be as accurate as possible.

Theophilus, was as Luke, a Gentile and it is agreed that there would be nothing about the gospel that a Gentile could not understand. Luke does not make the connection as strongly as others that Jesus was the fulfillment of Jewish prophecy. There are a couple of other interesting points…rarely does he quote the Old Testament and he was known to insert Greek as a substitute for the Jewish equivalent, this so that the Greeks would understand. He also never used the Jewish term Rabbi, preferring a Greek word meaning Master. Matthew traced the lineage of Jesus back to Abraham, founder of the Jewish race but Luke traced instead to Adam…the founder of the human race. His style of writing because of these and other points made his book the easiest of all the gospels to read. Luke wrote for all people, everyday folks like us. You could say that Luke’s gospel is one of prayer. Luke shows us how at all the great moments in the life of Jesus he prayed. To Luke the door to prayer was always open to take us closer to God, the Father. As standing would go, women in Palestine were at the bottom of the pole so to speak. In their prayers in the morning Jewish men would thank God for not having made them a Gentile, Slave or Woman. In the gospel of Luke women are given a very special place. The story of the birth of Jesus is told from Mary’s perspective. It is very plain that Luke has given special status to women…we read of Elizabeth, Anna, the widow at Nain and the woman that washed and anointed Jesus’ feet in the home of Simon the Pharisee. Luke gives us a vivid picture in words of Martha, Mary and Mary Magdalene. Luke’s gospel is most certainly one of praise. Luke’s praising of God occurs often, in fact more than in any of the rest of the New Testament.

There’s a wideness in God’s mercy, Like the wideness of the sea;

There’s a kindness in his justice, Which is more than liberty.

For the love of God is broader
Than the measures of man’s mind;

And the heart of the Eternal Is most wonderfully kind.

Luke’s gospel is a demonstration that this is true.

I hope you will join me next week as we look at the first chapter of Luke’s Gospel.