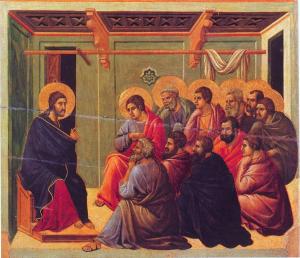 Last week we took a look at the hearers of the Parable. This week another parable which is usually called the Parable of the Wheat and the Tares. Tares are a weed referred to as bearded darnel and were almost impossible to tell from the wheat. It could also be poisonous, harmful to those who ate it. It had to be separated from the wheat and once more Jesus uses real life actions that would be recognized by the listeners to teach the twelve. After  speaking to the crowds Jesus went into the house and was approached by his disciples, asking him to explain the parable of the weeds of the field. As we noted last week the disciples were confused and frightened by the attitude of the people and of course felt threatened by the opposition of the Pharisees. Also with these things happening there seemed to be a gradual closing of the doors to the synagogues. You till the ground, prepare the soil and plant the seed but still somehow no matter how hard you toil there always seems to be weeds. These tares that had intertwined with the wheat… the harvest would require that they be separated from the wheat. Once separated it was tied in a bundle in the field, collected and put in the fire. The disciples were worried about the kind of people that were coming to Jesus. Many of these people the world would look unfavorable on, the whole of their lot very unsatisfactory in their behavior and activities, they would hardly stand up to a closer look. The disciples too looked for a new Israel that would conquer their enemies, and set the moral integrity of the people to a higher calling. Even the Scribes and Pharisees found the company Jesus kept to be questionable. The disciples were waiting for Jesus to sort out this mixed crowd who followed him. Jesus is painting a picture in words using the weeds among the wheat to capture their attention. Jesus welcomed all people and the disappointment of these men that Jesus had not yet made a weeding out of his followers was joined by the Pharisees who showed their disgust that he had yet to do so. It was these factors that perhaps led Jesus to tell them this parable.

Evil is among us everywhere and it not always easily recognized, much like the darnel among the wheat. There is the chance we will make the wrong decisions when we harbor intolerance and a critical spirit guides our hearts. Picture the darnel as the evil sinners among us and the wheat as the good people that they have come among. We are told in Matthew 7:1 … “to judge not, that you be judged not”. I believe that as a people we are not very good at distinguishing between good and bad. We must be patient in our actions toward others, there is the comfort of knowing that the harvest will come. We have often heard “in God’s time”, it is inevitable that God’s judgement will come. Just like the harvest used here as an example of the separation of the darnel from the wheat, so shall the sinners be separated from the good, in time, by God’s judgement.

The takeaway from today’s Pew. Be patient, in God’s time his will be done. Know that the harvest will come.